Ever wondered how big a blue worm, perionyx excavatus can grown up to? Take a look at our video below and be amazed at how big these worms can grow.

Posted by worm-compost-bins at 04:35 No comments: 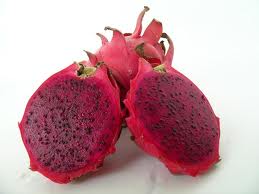 Yeap! We were quite amazed to find that the worms actually eat the dragon fruit peels , of course we eat the fillings :) , rather quickly. We do hope that it was not because of they were bored of the normal diet though!

Some of you may think that your worms eat rather slowly, but we found out that they tend to consume food that are easily digestible. Dragon fruit skins are very soft and hence possibly very easily digestible by our worms. So in the mean time if you are thinking of what to feed your worms, try dragon fruit skin. Well the only problem would be that your grocery expenses may start to escalate!

So tell us about your experience in the comments section below!

How the Worm Factory 360 works

This is a short video on how the Worm Factory 360 works.

Posted by worm-compost-bins at 02:06 No comments: 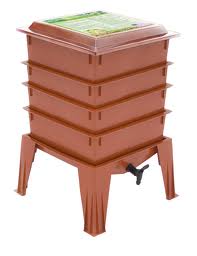 For more info, you can view the product here, in our International Product page.

As for the composting worms, you can purchase it from us.

What to feed your worms?

Often many queries that we received from our customers would be, " What should we feed our worms?" Or " What waste will the blue worms eat the fastest?". We have already written an article over here but this time round this post will be a little more light hearted.

One of our worms' favourite diet would be red apples. As mentioned previously, " An apple a day, keeps a worm happy :)"

This is certainly not true if all our apples are eaten this way.

For us, we always like to have the thought that no food shall go to waste and thus we feed mainly apple cores to our worm bin. We do believe that most average people, actually eat apples with their cores intake. After all, what is wrong by eating that way? We do get more worm castings and not to mention worm tea.

Worm leachate is a liquid produced naturally in the worm composting process. Worm compost has an extremely high level of microscopic activity within it and it contains a large amount of microscopic bacteria breaking down your waste within the compost bin. The level of microbes and microbial activity within the worm bin is extremely high, far exceeding the levels found in normal soil, by 10 to 20 times. When liquid is passed through the worm bin, it mixes with the microbes and the resultant by product liquid is called leachate. Leachate is more commonly known as Worm Tea or Compost Tea, all referring to the same by-product of a liquid collected at the bottom of the worm bin.
Leachate is commonly collected 1-2 months after setting up your compost bin. While you may experience some liquid collection in the first few weeks, it is advisable to pour it back into the compost bin. After all, reintroducing additional microbes into the bin does no harm and all good! However, after the worm bin has ‘stabilized’ and the worms are doing their job with much efficiency, you can start collecting the Worm Tea which can be put to many uses.
Worm Tea as mentioned, contains a very high concentration of microbial activity. This is usually in excess of what plants require. To get the most out of this precious worm leachate, consider diluting it with tap water. The Compost Tea can be used as a fertilizer by applying it directly to the soil, or it can be used as a pesticide by spraying it on the plants leaves.  This will prevent insects and other unwanted garden pests from infecting your plants with diseases and eating its leaves.
Usually, self-made home compost bins are unable to collect such worm leachate as there isn’t a specialized way to harvest this useful garden liquid fertilizer. However, you can still attempt to do so by drilling holes at the bottom of your home-made worm bin. Put a tray beneath it and the dark brown liquid that you will find there is Worm Tea! For a more fuss-free way of collecting worm leachate though, use a specialized worm composting bin like the Can-O-Worms of the VermiHut. Each of these systems has a liquid storage compartment and a tap attached to it. To collect the Compost Tea, simply turn the tap and you can start using it on your plants instantly

Not many people know what is the meaning of hermaphrodites. Hermaphrodites means that one possesses both male and female organs. All worms are hermaphrodites. This is means you will only require two worms to breed and make many more babies.

Each mating partner produces a capsule (sometimes called a pod/cocoon)  or egg. Two of the species mentioned in this blog are the red worms (tigers) and blue worms. Tigers always require two worms to reproduce. The blue worms wherever, can reproduce on their own. Some claim that they have never seen two blue worms coupling and it seems like the blues are permanently parthenogenetic.

This means that when a blue worms had reached sexual maturity, it will start to reproduce on its own. How amazing is that!! Unlike other worms, no time is wasted in pre-mating courtship or finding a mate of the same species etc. This is one of the main reasons the blue worms are such great breeders!! give them a try and the next thing you need to worry is to build another worm farm. As mentioned in the precious post, they are ferocious eaters and can be great composters.